We help the world growing since 2004 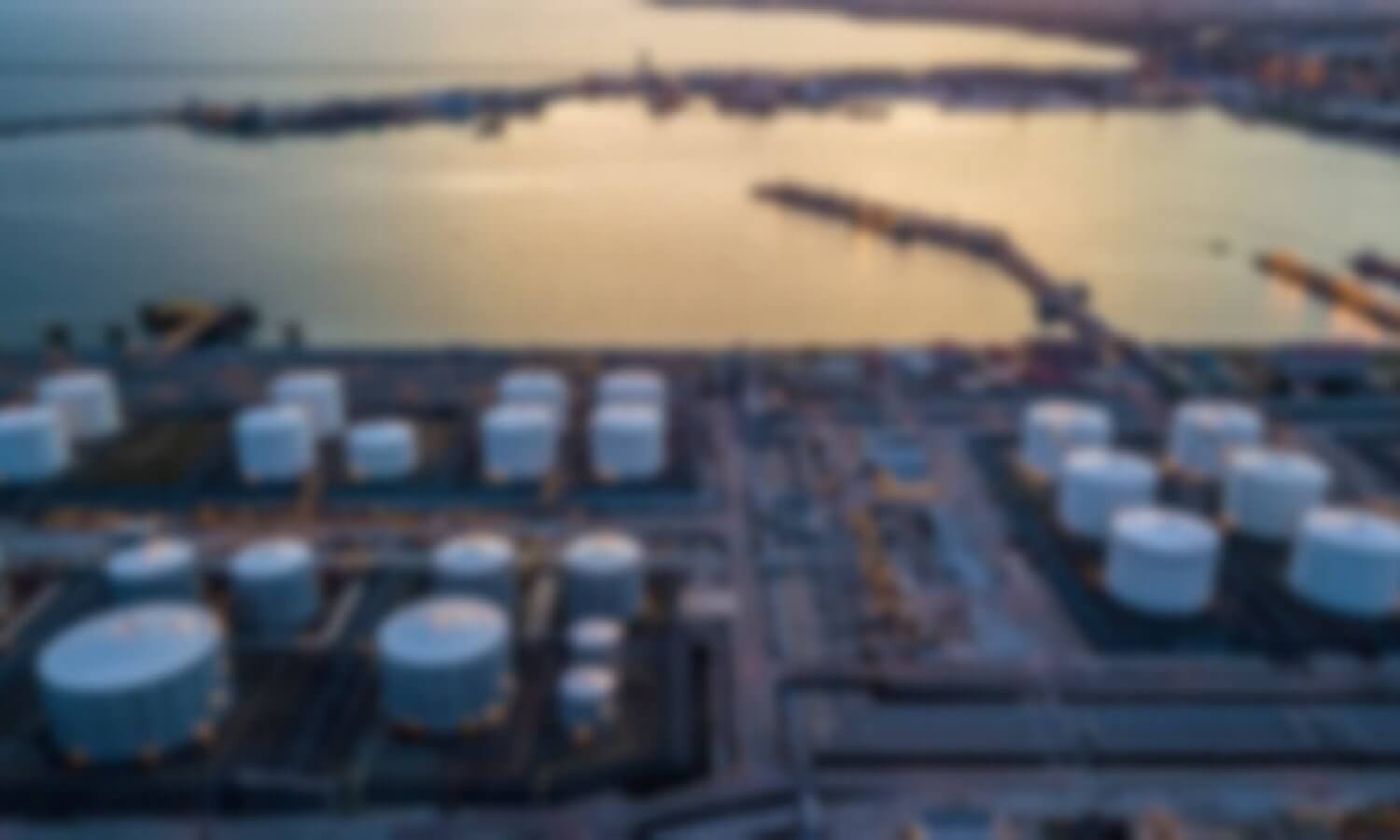 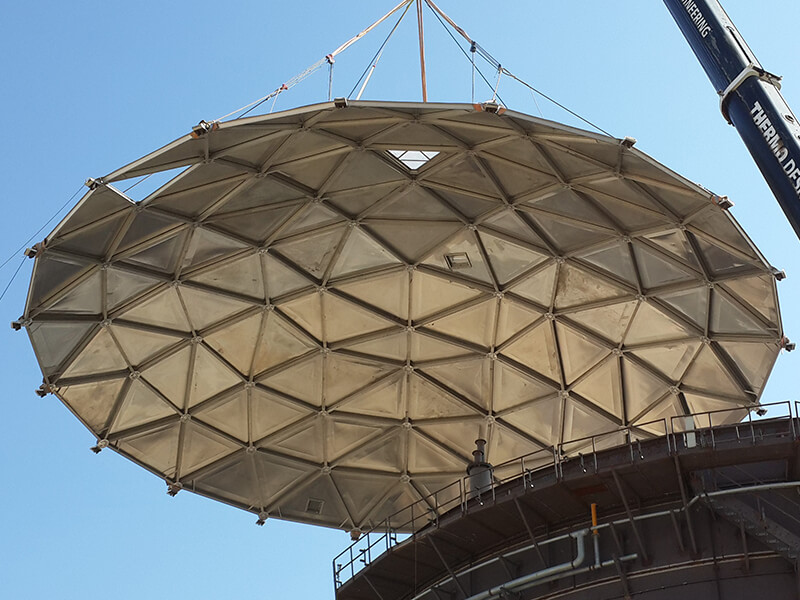 Tanks with external floating roofs are used primarily to contain liquids with high vapor pressures, when the vapor emissions from fixed roof tanks would exceed the standards  set  by  the  local jurisdiction.  They  are generally preferred to tanks with internal floating roofs, because they are more economical to construct and much easier to inspect and maintain.

Air scoops are required to ventilate the space between an internal floating roof and the fixed roof above it, to prevent the accumulation of vapors in an explosive mixture with air. A disadvantage of internal floating roofs is that the seals cannot be maintained while the tank is in service.

As the diameter of a floating roof decreases, the buoy- ant force that floats the roof decreases in relation to the frictional resistance to vertical movement at the periphery of the roof. This loss of buoyancy can result in erratic roof movement during the filling or emptying of small-diameter (10 to 15 feet) tanks. It is desirable to minimize this potential difficulty with small diame- ter floating roofs by avoiding roof ladders, swing lines, and  closed-type  roof  drains  whenever  possible.  This can be accomplished by using an internal floating roof, which normally does not require these accessories.

Appendix C to API 650 covers the design of external floating roofs, but it recognizes that the design can involve many variations and proprietary details to which the designer and the purchaser must agree. Therefore, only minimum requirements are given that directly affect safety and durability. It is important for the purchaser of a tank with an external floating roof to provide the designer with supplementary requirements that are needed for the service conditions and operating procedures. The ATECO Model Specification TM969 supplements the requirements of API 650. Both documents are discussed next.

The primary drain for an external floating roof is required to be 3-inch minimum for tanks up to 120 feet in diame- ter, and 4-inch minimum for larger diameters. Drains are required to have a check valve near the roof to prevent  backflow of the liquid stored in the tank, in the event of leakage into the drain (API 650, Appendix C, Para- graph  C.3.8).  Section 630 covers  roof  drains  in more detail.

The tank roof should be designed such that the tank can  overflow  and  then  return  to  a  normal  operating level without causing damage to the tank shell or roof. Overflow drainage openings and appropriate alarm de- vices must be provided if the top of the shell has been extended to contain the roof seals at the highest point of travel. However, shell extensions are not recom- mended because they can lead to overflows even with good alarms.

Suitable devices must be provided to keep the roof centered  and  to  prevent  its  rotation under  all lateral loads that can be imposed on the roof, such as by wind and the roof ladder (API 650, Appendix C, Paragraph C.3.12).

The annular space between the outer periphery of the floating roof and the inside of the tank shell must be sealed with a flexible device (API 650, Appendix C, Paragraph  C.3.13).  Section  473  covers  roof  seals  in more detail.

Additional  Requirements. Different roof configurations were shown in Figure 100-1. The two preferred configurations for external floating roofs are the double-deck, and the low single-deck with 30% minimum pontoon area. The low single-deck is the more efficient of the two for 30- to 170-foot diameter tanks. It is difficult to design pontoons for smaller di- ameters, and  single-deck  roofs  with  larger  diameters can be too flexible.

A double-deck roof is appreciably stronger than a single-deck roof. Therefore, a double-deck roof is superior for 1) heated tanks because it can support the weight of the insulation better, and 2) for tanks expected to accumulate a heavy buildup of bottom sediment that could result in uneven support when the roof is resting on  the  legs.  The  double-deck  roof  can  also  handle heavy rainfall better and can be equipped with emergency drains to drain the roof without pumping if the primary drains are plugged.

The minimum acceptable thickness for deck and inter- nal bulkhead plates is 3/16 inch. Plates for pontoons that are exposed to stockside corrosion should be 5/16 inch thick and thickness increased to 3/8 inch if cor- rosion is expected to be very severe.

The pads on which the legs rest should be made from 3/8-inch thick plate that is 14 inches square and should be welded to the bottom plates with 1/4-inch continu- ous  fillet  welds. Leg  loads above 10,000 pounds re- quire specially designed pads. The pads should be designed to  distribute  the  bearing  load  over a  large enough area so that the maximum bearing strength of the foundation under the tank bottom is not exceeded.

Roof legs and their reinforcing pads are normally welded to only the topside surfaces of each deck. It is advisable to weld on the bottomside of each deck as well to prevent eventual cracking of the topside welds. This additional welding is especially important for large diameter roofs that are subjected to higher loads and greater flexing than are small diameter roofs, and for tanks in sour water service.

It  is  very  important to make each pontoon compart- ment independently liquid and vapor tight, and to be sure each compartment can stay leak tight through all foreseeable emergency conditions. The repair and re- floating of a sunken roof is very costly, and the sinking of a roof while fighting a rim fire can have very seri- ous consequences. Manways for access to pontoon in- t eriors  should  b e  equi pped  with  covers  that  are gasketed to be liquid tight and that are held in place with clamps. Each cover should be fitted with a goose- neck vent pipe to protect the pontoon chambers from  bulkheads should be continuously fillet welded along all edges, including the top edge as discussed in TM969 . API 650, Appendix C does not require welding of the top edge. The tank fabricator should be required to test each pontoon compartment during con- struction, to demonstrate that each is liquid and vapor tight. Refer to Section 600 for more details on appur- tenances.

Most  of  the  above  design  requirements  for external floating roofs apply to internal floating roofs as well. One significant difference is that drains are not needed for internal floating roofs. Also, these roofs need not be designed to float with the accumulation of rainwater on the deck, because their fixed roofs shield them from rainfall.  However,  they  are  required  to  be  designed with sufficient buoyancy to support at least twice their dead weight and to remain afloat with any two pontoon compartments flooded (API Standard 650, Appendix H, Paragraph H.5.1.2).

Circulation vents are required in the shell or fixed roof above the seal of the floating roof at the maximum liquid level (API Standard 650, Appendix H, Paragraph H.6.2.2). The vents can be no more than 32 feet apart and must provide a total open area of at least 0.2 square foot per foot of tank diameter. In addition, an open vent of at least 50 square inches must be provided in the fixed roof at the highest elevation possible. All of the vents must be equipped with weather shields to prevent the en- try of rain water and screens to keep out birds.

Liquid overflow slots are required to indicate when a tank is filled to its design capacity. The slots must be sized to discharge at the maximum pump-in rate for the tank. The slots can contribute to the circulating venting requirements, but they must be sized such that no more than 50% of the vent area can be obstructed during overflow. See Section 680 for specific details on vents and overflow design.